To see this working, head to your live site.
Search
Libni Shetty
Apr 13, 2020

As markets take Covid-19 hit, is it time to invest?

The fear of Covid-19, more commonly referred to as novel coronavirus, spreading outside China at an alarming pace has spooked global equity markets, including the Indian equity market. The benchmark S&P 500 index which measures the stock performance of the top 500 US companies, corrected around 13% between 19 and 28 February. Taking cues from global peers, S&P BSE Sensex lost 1,448 points on 28 February alone, wiping out close to ₹5.5 trillion of investors’ wealth. Till 28 February, it had corrected 9% from its peak on 14 January 2020. On 2 March, the market fell another 150 points, and the volatility is expected to continue for some time. So why are the markets fearful and how should you deal with the current situation?

The carnage is happening across global equity markets, and India can’t stay unscathed," said Sanjeev Hota, vice-president, Sharekhan, a subsidiary of BNP Paribas and a stock broking company. The global markets have tanked on the fear of Covid-19 spreading outside China at an alarming pace.It started from Wuhan in China but has now spread to 58 countries, according to the World Health Organization report as on 1 March. Until 19 February, only three casualties were reported outside of China, but that number is now up at 104 in a matter of 10 days. Globally, the number of people infected with the virus has increased to 87,137 and 2,977 deaths have been reported so far.The shutdown of production units and quarantined towns in China has hit economic activity and in turn, the growth of the country. As per a Confederation of Indian Industry (CII) report, China’s GDP is expected to decelerate by 1-1.25 percentage points over 2020 due to the halting of economic activities in key production centres. “The Q1 earnings of China are likely to be a washout going by the current situation and this is likely to have an impact on global growth as China currently accounts for 16% of the world’s GDP and contributes approximately 24% of the global value-added imports," said Pankaj Bobade, fundamental research head, Axis Securities Ltd. 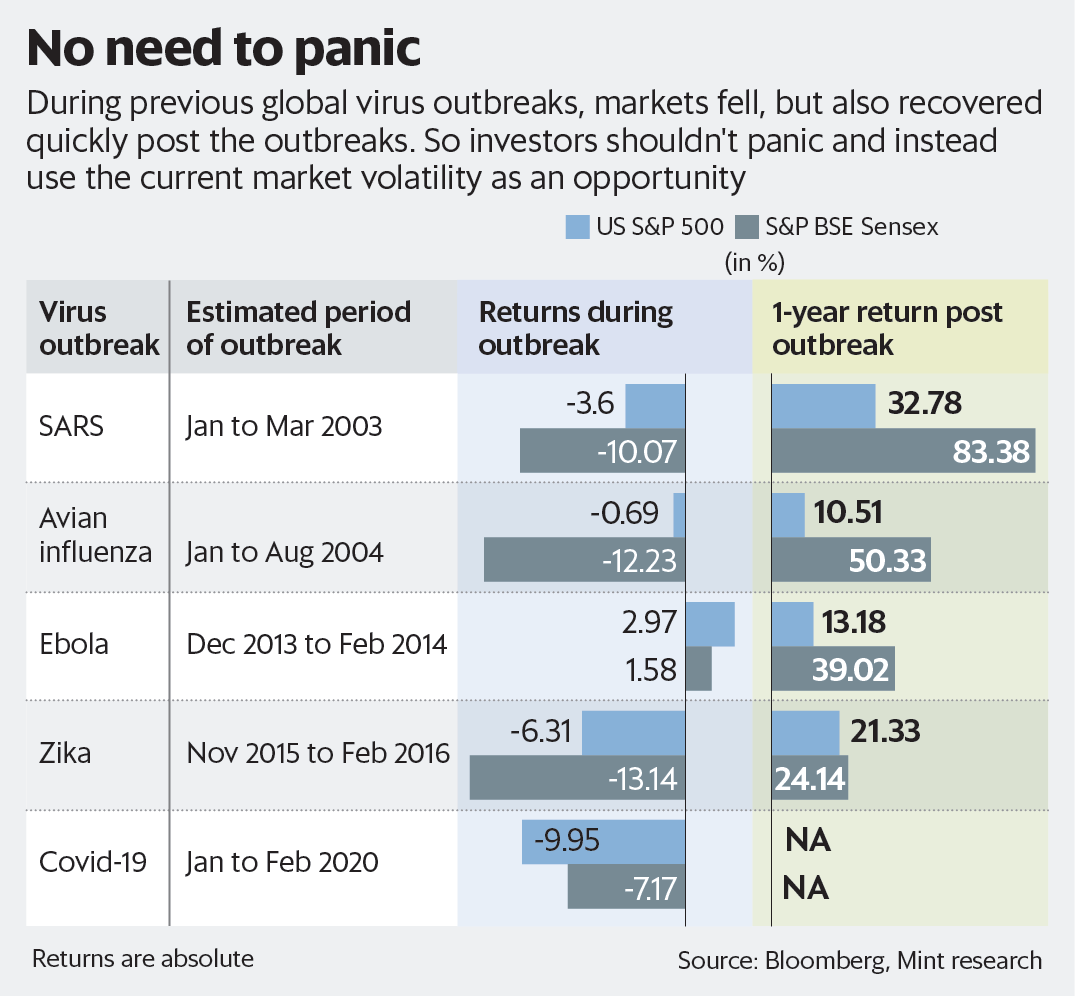 No need to panic As the world economies are integrated, it will also impact global growth. “It is estimated that global GDP will suffer an impact of -0.5%." said the CII report.With the virus spreading outside China, people may curtail their discretionary expenditure on travel and other things, which will impact global growth. Many airlines have cancelled flights to affected countries and airfares have been slashed (read Airfares drop but is it safe to go abroad? on the next page). “As the travel and tourism industry accounts for around 10% of the global GDP, this will have an impact on global growth," said Bobade.

The market volatility can be worrisome in the short term, but long-term investors need not fret.According to experts, the correction may be warranted since the markets have already rallied a lot. “Global equity markets, including Indian markets, have rallied a lot, driven by surplus liquidity. The Covid-19 epidemic is a good enough reason to witness a correction. Also, we have seen global markets correct in the range of 5-12% in the past in case of previous epidemics such as Ebola and SARS. So far, we have seen a correction of 7-8% (in global markets after the outbreak of coronavirus). Therefore, we think there is more room for correction," said Hota.“Markets are correcting on expectations of supply shocks given the disproportionate dependence of the global economy on goods from China. Globally, markets are fearing that these supply shocks would get converted into demand destruction or deferment, further hitting global recovery," said Bobade.Markets are also fearing that these developments may lead leveraged companies to default and create global non-performing assets (NPAs) in the banking system, he said. “Any move by the governments or central banks to contain the fallout would help arrest the market correction," Bobade added.But this is most likely a temporary phenomenon, which was the case during earlier epidemic outbreaks also (see graph). For instance, US S&P 500 lost 3.6% during the SARS outbreak between January and March 2003 (estimated period for the outbreak), but gained 33% a year after the outbreak. The BSE Sensex lost about 10% during the period, but gained a huge 83% after the outbreak. Similarly, during the Zika outbreak between November 2015 and February 2016, it fell around 6%, but was up more than 21% a year after the outbreak. The BSE Sensex, lost about 13% during the Zika outbreak but was up 24% a year later.“We have seen that these are temporary phenomena. In the previous outbreaks also we have seen markets recover smartly after such a crisis within three to four months. This time also we expect markets to recover post this crisis," said Hota.

What should you do?Experts said there’s no need to panic in such situations as markets regularly go through cycles like these. In fact, you should use the opportunity to invest for the long term. “We see the current market correction as an opportunity to invest for long-term in quality companies," said Hota.However, it is best to stay away from direct stock investing if you don’t have the wherewithal to research each company and make a decision. You can invest through mutual funds instead where the fund manager will do all that on your behalf.“These are instances which make you fearful in markets. Market volatility helps you build wealth over a period of time. One should understand that these are market cycles. We don’t see any significant long-term impact. Therefore, we are advising investors to continue disciplined investing through systematic investment plans (SIPs) and stick to their asset allocation. Those who have the money can use this opportunity to invest more," said Anil Rego, chief executive officer and founder, Right Horizons, a financial planning firm.When it comes to equity investing, financial planner advise sticking to the long term. As an SIP investor, you should treat such short-term corrections as opportunities to accumulate more units at lower prices and benefit subsequently when the markets recover. So continue investing for your long-term goals and don’t let the temporary market correction faze